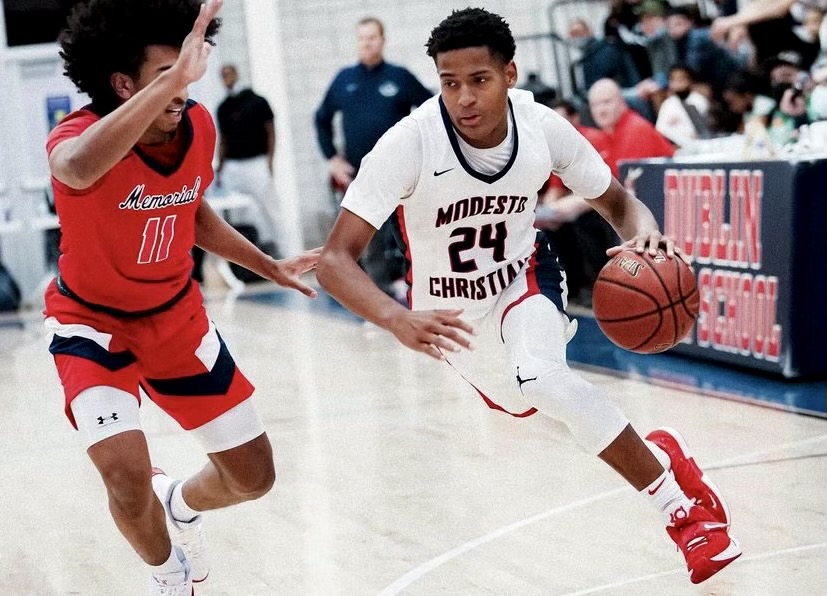 Modesto Christian sophomore Jamari Phillips holds offers from Kansas, USC and Washington, among others, and he's ranked No. 17 in his class in the nation.

'We've never ran from anybody,' but Crusaders will fly with national schedule

In the closed gymnasiums of the COVID shortened season, the Modesto Christian boys basketball team showed its potential. The Crusaders rattled off 15 consecutive victories and focused on developing a chemistry amongst its young nucleus.

One game into the new season and that potential has turned to purpose, and the excitement along Sisk Road is at an all-time high.

Ranked among the top programs in the state, Modesto Christian opened the season with a commanding 87-71 victory over San Joaquin Memorial at the NorCal Tip-Off Classic in Dublin on Monday. The Crusaders scored the game's first nine points and led by as many as 25, a comfortable start to a schedule loaded with big names, marquee tournaments and long flights.

Modesto Christian is bound for Las Vegas on Saturday, where it will tangle with Durango, historically one of Nevada's top programs. The matchup sets up as a home-and-home of sorts; Durango has entered the Holiday Hoop in late December, completing another loaded field at the area's premiere tournament.

"We've never ran from anybody," Fantazia said. "I don't care about my win-loss record. We're trying to get better."

And so begins an ambitious non-league schedule for the Sac-Joaquin Section's most decorated basketball program. Modesto Christian, which has hung 19 section  banners, has entered tournaments, far and wide, in preparation for the Tri-City Athletic League and a deep post-season run, including: the Battle Born Classic in Las Vegas, the Clovis West Nike Invitational in Clovis, Holiday Hoop, and the Quincy Shootout in Illinois. There's also a showdown looming with Salesian at the MLK Classic in January.

The Crusaders are ranked fifth in the state, according to MaxPreps.com, and No. 12 in the west region in the FAB 50, produced by ballislife.com. Now in his sixth season at the helm of his alma mater, Fantazia can't remember a team in Modesto Christian's star-studded history that has been ranked as high in December.

"Personally, I didn't think we'd be that high," Fantazia said, "because we're so young."

The Crusaders' youth is intriguing.

Modesto Christian welcomed back all but one player from last season's unbeaten team and then added two of the most explosive underclassmen in the state. Transfer Ty Virgil is a 6-foot-4 sophomore with arms that stretch on for miles. He played at a prep school in Southern California last season. Zeke Davis is a 6-3 freshman.

Sophomore shooting guard Jamari Phillips is No. 17 in the nation for his class, according to ESPN, and he holds offers from Kansas, USC, Mississippi, Washington and Cal. Junior B.J. Davis is another quick-twitch guard with a mail bag full of interest. Davis is being courted by Hawaii, Santa Barbara, Montana and San Jose State.  Sophomore Manasse Itete is a 6-6 post who started as a freshman.

"We went 15-0 last year and really started installing a system" and a culture, Fantazia said, "but no one really saw it. Coach (Chris Teevan) came over and did a great job of helping me with that. Greg Rosenbaum rejoined the staff, too. We carried all of that momentum into this year. That whole group came back, and then you add players like Ty and Zeke. ... Our culture is as good as it's been since I've been the coach."

That culture is protected by a selfless senior class, which brings balance and leadership to the locker room. Alex Argandar, Austin Moore and Everett Hunter have been at Modesto Christian since grade school. They've grown up around section champions and watched closely as the Crusaders reached CIF State Northern California Open Division finals in 2015, 2016 and 2019.

"It's a good mix between them and the young kids," Fantazia said. "There's not one ounce of jealousy from those three. They just love the program. They're MC to the fullest. They want to win games and leave a legacy. It's been cool to see."