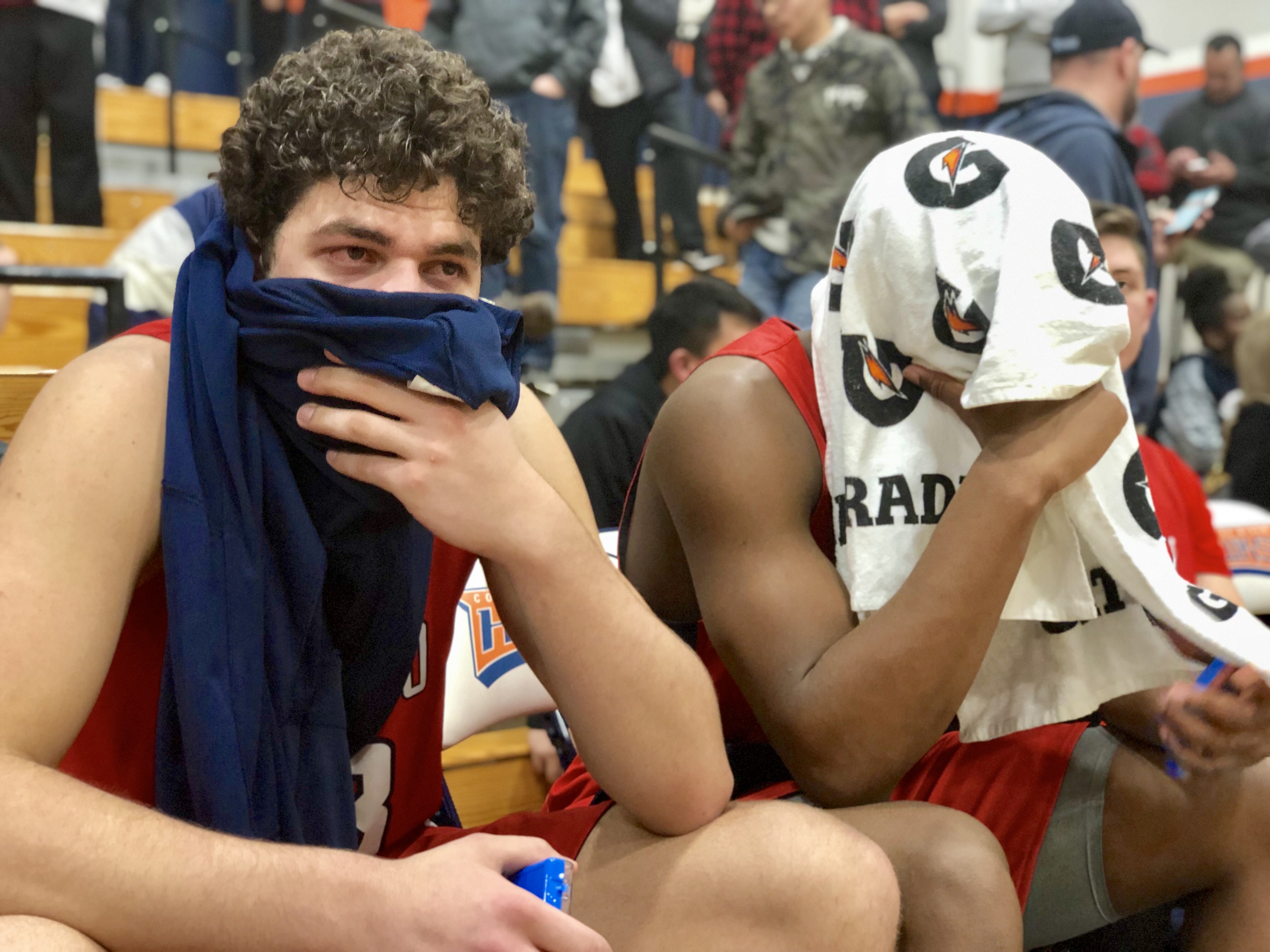 ELK GROVE — Brice Fantazia’s instruction was drowned out by the band and the buzz that enveloped the gymnasium at Cosumnes River College. Soon, Sheldon High’s takeover of the CIF State Northern California Open Division final would be complete.

It just took a moment.

The Huskies trailed 9-0 after three minutes, but revved and accelerated to top speed, turning a near-disastrous start into an exhibition of its offense in a 57-48 victory. The Huskies turned mistakes into points and caught fire from beyond the arc, tilting the grudge match with Modesto Christian in its favor with an electric 21-3 charge in the first quarter.

"Tip my hat to Sheldon," Fantazia said, clutching his son in the hallway outside his locker room. "They got down 9-0 and we knew they weren't going to quit. They made a big run and we were never able to regain the momentum."

Said Aaron Murphy, a senior catalyst whose return from multiple ankle injuries sparked the Crusaders' postseason run: "We got rattled."

The main attraction — 6-foot-8 national recruit Marcus Bagley, the younger brother of Sacramento Kings rookie Marvin Bagley III — showed flashes of brilliance during the pivotal spurt. He ended the Crusaders’  9-0 run with a two-handed dunk, and then closed the half with a back-door alley oop. Bagley spun away from his defender and caught the lob over a crowd, giving the Huskies a 32-26 lead at the intermission.

If not for a barrage of 3s, including two by freshman Devin Day, Modesto Christian might have found itself in a deeper hole. Turns out, the ground was sinking beneath the Crusaders’ feet. Modesto Christian missed three point-blank shots around the rim to start the second half as the Huskies’ lead ballooned to double digits, 37-26.

Sheldon’s attack came from everyone and everywhere, not just Bagley, the team’s leading scorer. Bagley missed the first meeting — and all of the Sac-Joaquin Section playoffs — with a sore back as Sheldon rallied from a 14-point deficit to unseat the Crusaders as the Division I champs 11 days ago at the Golden 1 Center.

On Tuesday, the deficit wasn't nearly as great, an easy climb for the Huskies’ balanced attack. Justin Nguyen, the steady and stoic point guard, connected on four 3-pointers — two in the first quarter and two more in the third as Sheldon threatened to pull away. Seven players scored in the win, including three in double figures: Nguyen led the way with 18, and Kaito Williams and Bagley netted 10 apiece.

"We've been here before, so we're an experienced team," Nguyen said. "We know if we play hard and play together, we can come back. It was a great momentum-changer. Everything was going our way."

The Huskies return to the Open Division state final for the second consecutive season, shoring up a rematch with defending champion Sierra Canyon, which stopped Mater Dei's season. The final is Saturday night at the Golden 1 Center.

"They're so deep and athletic and big, and they've got guards," Fantazia said. "They're a great basketball team, a top-50 team in the country. When they get rolling, they get rolling. I can't really put my finger on it. We've had their number in the past, but this year, they got us."

Modesto Christian’s offense stalled. Early turnovers doomed a 9-0 lead and the Crusaders went nearly 4 minutes without a point. Fantazia’s side managed just 16 field goals (versus Sheldon’s 24) in a game that demanded shot-makers.

In his final game, UC Davis-bound forward Murphy led the way with 13 points, completing his banner postseason. Day had nine points, all on corner 3s, while Alex Merkviladze and Dathan Satchell each had seven.

"We really struggled to finish at the rim tonight. We missed nine or 10 layups," Fantazia said. "We shot 30 percent from the two tonight and that's really uncharacteristic for us. A couple of our guys didn't have their best games and it happens. I'll still take this group over any other group in Northern California, regardless. It just wasn't our night."

In his pregame, Fantazia warned his team to stay together and weather every Huskies’ run, because they would come. He implored them to protect the ball and echo his instructions. None of it happened.

"We always get too comfortable. You can't be doing that," Murphy said. "It's not what great players or great teams do. There are some things we just have to learn."

The loss brought to close a season full of promise and potential, but one marred by inconsistency in big games. Modesto Christian lost eight times, three to state No. 1s and four to teams ranked in the top-50 in the state. Yet, the Crusaders stormed into the Open Division final after outlasting state No. 1 and national top-5 Salesian, the Pride’s first and only loss of the season.

But, the magic that carried the Crusaders that night didn’t travel to Elk Grove for the final. Modesto Christian is now 0-3 in Open Division finals and still searching for its first state title since 2004.

"We overcame a lot of adversity this season (and) one of the toughest schedules in MC history," Fantazia said. "We didn't finish the job like we wanted, but when you're in the Open Division you can't base your season on winning the Open Division state title. You've got nationally ranked team. To get to this point, we had a very successful season.