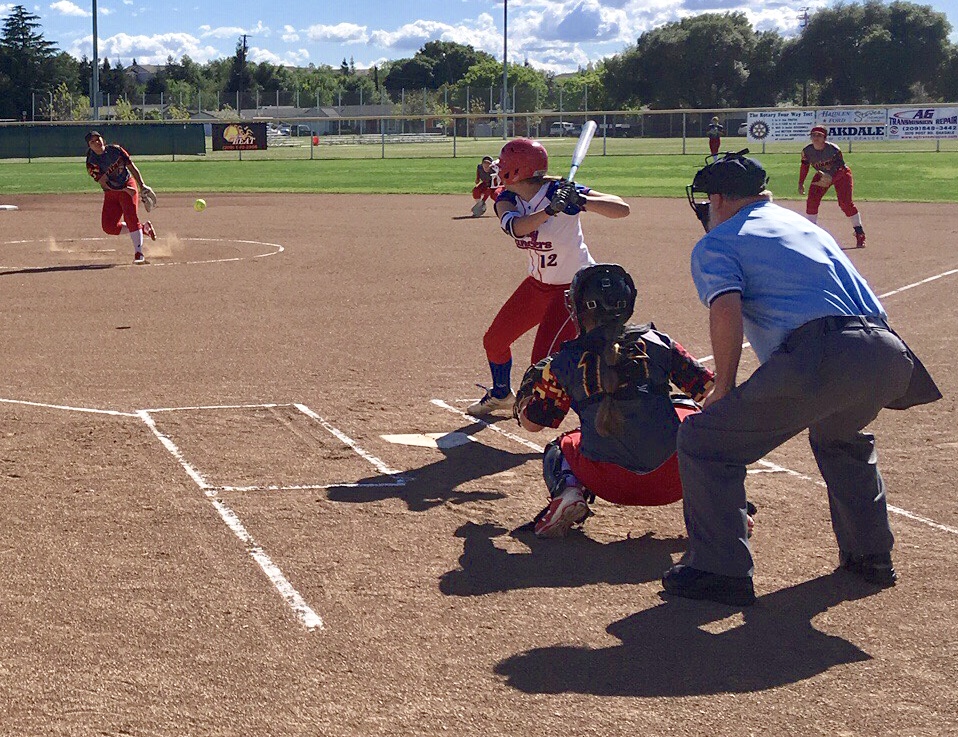 Oakdale's Lexie Webb delivers the first pitch of the game in a 5-2 victory over Valley Oak League rival East Union.

Where does Oakdale softball rank among the state's best?

The Oakdale High softball team won’t sneak up on anyone this season.

Not here. Not in Sacramento. Not anywhere.

Armed with mega-watt talent Lexie Webb, a senior committed to FresnoState, the Mustangs have been the season-long No. 1 in the FrontRowPreps.com large-school poll.

Oakdale is unbeaten through 17 games and boasts a 15-game win streak. It’s only blemish isn’t a blemish at all — a scoreless tie with Del Oro, a former state Top-25 team, at the Franklin High Tournament in March.

Since then, it’s been a string of mostly convincing victories, highlighted by Webb’s powerful game at the plate and from the chalked circle. She ranks among the region’s leaders in pitching and hitting, including home runs (six), average (.651), ERA (0.46), wins (10) and strikeouts (125).

In two games this week, the Mustangs have throttled Sierra, a two-time defending section champion, and Weston Ranch by a combined score of 31-0. Oakdale owns a one-game advantage over East Union in the Valley Oak League standings.

The team accolades have followed.
Oakdale is No. 13 in Cal-Hi Sports’ latest state ranking. According to Cal-Hi Sports editor Mark Tennis: “Teams will need to play their very best game to even have a chance in the Sac-Joaquin Section playoffs.”

Oakdale has won four of its five section titles in the last 15 years, but none since 2014. The drought is compounded by the fact that coach Larry Loger has had all-world talent in the last three years, including Oklahoma freshman Grace Green and Arizona State’s twin sisters Maddi and Kindra Hackbarth, among others.

If this the year Oakdale returns to the winner’s circle?

The Mustangs are the smart bet, according to prognosticators like Tennis.