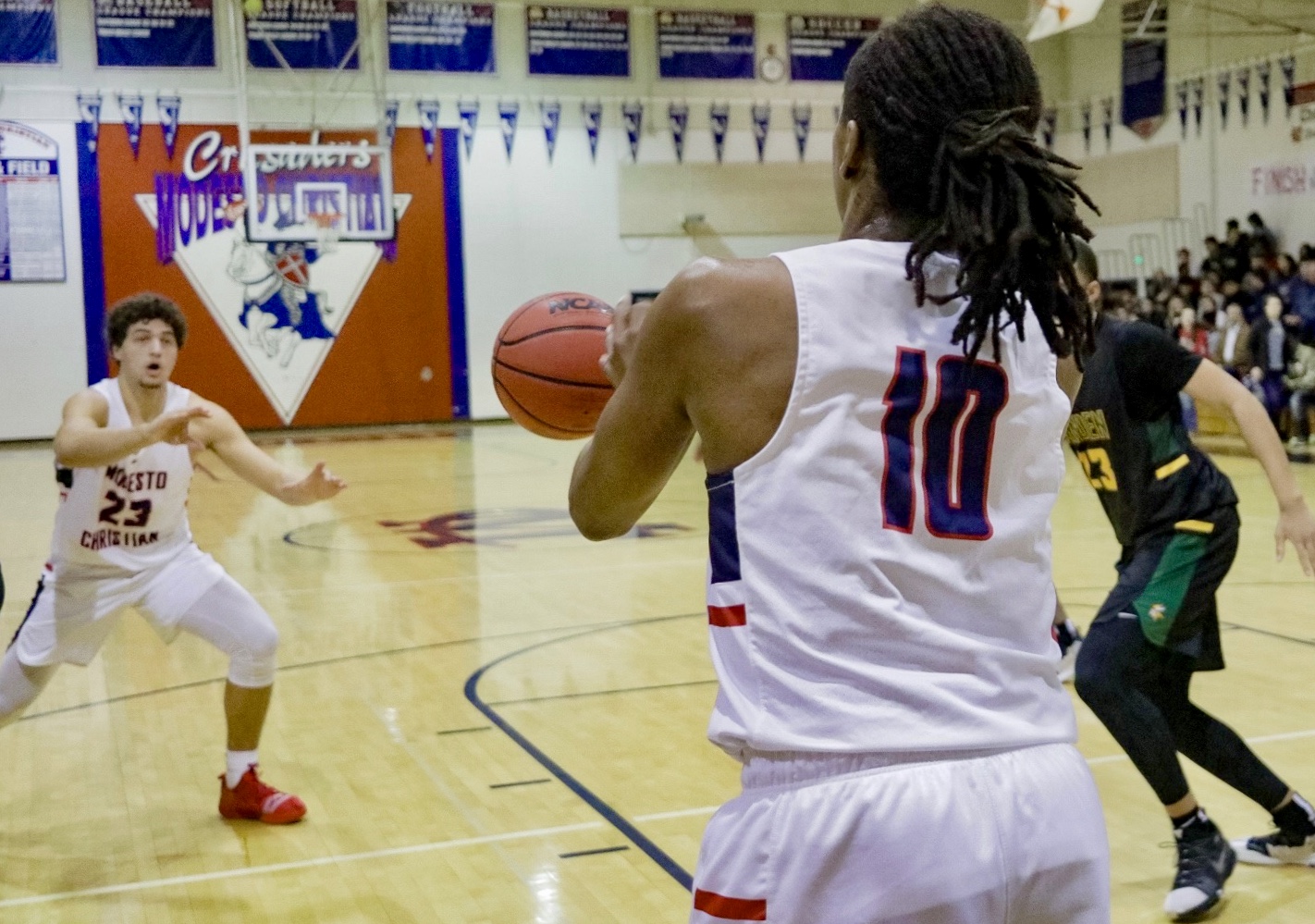 Modesto Christian senior Earv Knox had 14 points and nine assists in a 96-62 victory over Vanden at the MLK Showcase on Saturday, Jan. 19, 2019.

Earv Knox is the new guy no more.

The Modesto Christian senior flows about the floor in total control of the pace and ball, unfazed by what the defense is trying to do to him. He bounds through the press. Picks his way through a crowded paint. And with a surgeon’s touch and artist’s eye, he confidently sorts through the chaos at break-neck speed.

One year after transferring into Modesto Christian and enduring an injury-plagued debut season, the south Sacramento native has assumed control of the Crusaders, the most decorated program in the Sac-Joaquin Section, and his comfort level is an uncomfortable proposition for the opposition.

“It’s been tough. Last year he had to sit for 30 days and I think the second game back he hurt his knee. He was never right last year and we never saw his full capabilities,” Modesto Christian coach Brice Fantazia said. “Now he’s healthy and playing great. Now you’re seeing the Earv Knox we expected.”

To be sure, Vanden has had its fill of Knox and the Crusaders.

Modesto Christian chased the Vikings out of the gym on Saturday during the main event at the MLK Showcase, 96-62. The host Crusaders outscored Vanden 32-9 in the second quarter and led by nearly 30 points after three. With about seven minutes left in the game, the Modesto Christian student section began chanting, “Start the bus.”

These days, Knox is the bus driver.

A true pass-first point guard, Knox’s assimilation has allowed junior Michael Pearson to be more attack-minded. On a team loaded with capable scorers, including Dathan Satchell and highly-touted freshman Devin Day, Knox has become the chief facilitator. He keeps the peace, making sure all of Modesto Christian’s lions eat.

“It’s fun having a point guard like that, because you always know you got a point guard that is going to feed you and get you in a rhythm,” Satchell said of Knox, who is averaging a team-best five assists per game. “He facilitates and that’s a big part of his game.”

Saturday’s showcase was a feeding frenzy, too.

Satchell led all scorers with 20 points, including five 3-pointers, and UC Davis-bound forward Aaron Murphy netted 17. Day finished with 16, while rising junior forward Alex Merkviladze rounded out those in double figures with 10. Knox had 14 points, nine assists and five rebounds, and played extended minutes after Pearson left the game early with a bruised tailbone.

“When he’s getting other guys involved it just makes my job as a coach easier,” Fantazia said.

Knox highlighted Modesto Christian’s outburst with a sizzling dime, a corner-to-corner whip pass early in the third quarter. The ball traveled the baseline in the blink of an eye, finding Satchell in rhythm.

“Only a few point guards out here in NorCal are going to try to make that pass,” Satchell said. “He’s really underrated.”

So in tune with the flow of the offense, Knox began walking back down the floor with his arm raised while Satchell's shot was still in flight.

“That’s my shooter,” Knox said. “I knew he was going to be in the corner and I just threw it. He hit the shot.”

It was a scene lifted from a Golden State Warrior highlight. It was that kind of night for the Crusaders, whose rigorous schedule continues Monday at the MaxPreps MLK Showcase at Saint Mary’s College. Modesto Christian locks horns with St. John Bosco at 11:45 a.m. Later in the week, the Crusaders face national power Oak Hill Academy at the Mater Dei Nike Extravaganza.

“This is the right time to get our rhythm and get everything clicking,” Satchell said. “Right now we’re rolling. Hopefully we can keep it up.”