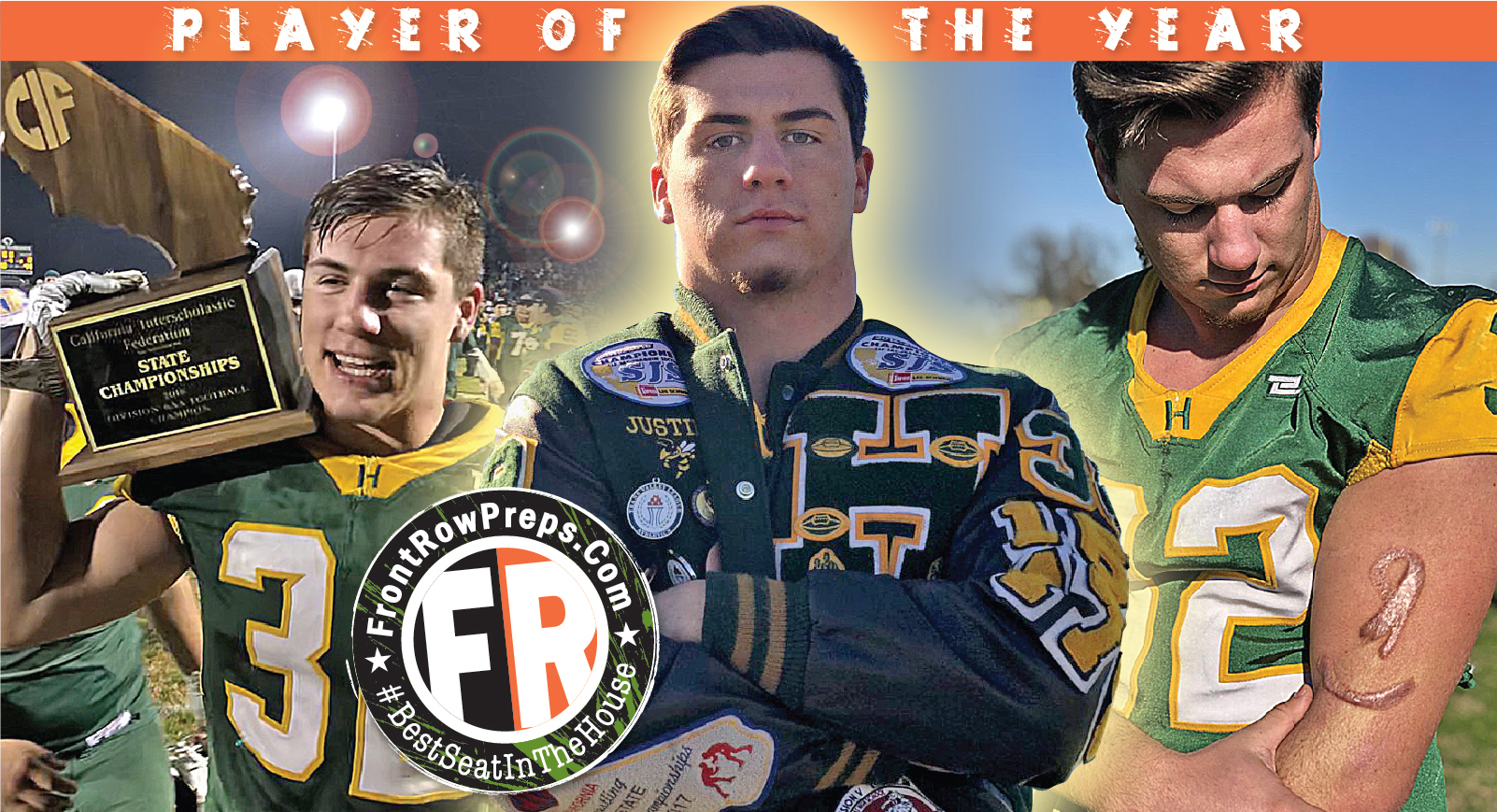 Brand Name: Hilmar's Rentfro is the American Chevrolet Player of the Year

Editor's Note: For the All-Region large- and small-school teams, click here. For a story on the Coaches of the Year, click here.

HILMAR — Justin Rentfro wears his passion and commitment to his family on his left arm.

It’s a scar, a backward R based by a curve. The Rentro’s — father George, mother Lacey and older brother Cody—call it the Backwards Rockin’ R, the family logo. Each bears the brand, one that never will be confused for market strategy in Silicon Valley.

This brand is the real thing, seared onto their skin, a rite of passage. Rentfro clenched a stick with his teeth as he endured the ritual in June of 2017.

“It’s almost too hot to feel it,” he remembered.

Only one player, however, literally put some skin in the game. He’s that serious about his family, his town, his high school and especially his teammates.

“I’m very proud of my family,” Rentfro said during a breakfast meeting at the Hot Rod Diner, a Hilmar landmark. “We’re definitely not perfect but my family is everything to me. It (the brand) says who we are.”

Rentfro, his pure physicality on display with each snap, willed Hilmar to glory. Unstoppable with the ball in his arms and a magnet to the ball as a punishing inside linebacker, he was both the immovable force and the irresistible object.

It is why he is the FrontRowPreps.com American Chevrolet Football Player of the Year.

Rentfro, a sturdy 6-foot-1, 215-pound senior, rushed for 1,125 yards and scored 15 touchdowns. On defense, he accounted for a team-leading 131 tackles. But those are mere numbers. His impact had to be seen to be appreciated.

The state final, an overwhelming 49-0 Hilmar win over Strathmore, is a case in point. On offense, he literally dragged defenders down the field for 139 yards on 11 carries. On defense, he finished the night of Strathmore star Alonso Acevedo on one crushing hit.

Acevedo entered the title game with 1,779 yards and 32 touchdowns. All he got against the Yellowjackets, however, was three yards on five attempts. Rentfro bent his own facemask, such was the force of that collision. Acevedo walked slowly off the field, his game done before halftime.

That Rentfro dominated the game without scoring a single point is not a surprise to Hilmar fans. The game clearly matters to him and those closest to him. The last people to leave McSweeney Field on championship night, long after the celebration ended, were the Rentfro’s.

The son of a rodeo bullfighter and clown, Rentfro was a born competitor. He reached the CIF State Wrestling Championships in Bakersfield as a sophomore, but football always was his favorite. His junior season was a success, but a late-game fumble proved costly during Hilmar’s 53-52 loss to Strathmore in the Northern California regional.

This season, the Yellowjackets lost Trans Valley League games to Ripon and Modesto Christian by a combined five points. Rentfro recalled the team’s disappointment the Monday after the loss to MC. They again were disappointed, but both coach Frank Marques and his team counted on one important fact — they still believed they had a chance to do something special.

“It’s more important to watch your losses than your wins,” Rentfro said. “That’s how you learn.”

Hilmar did not lose again. In five playoff games, only one — a 28-18 victory over Escalon — was competitive.

Consider the Yellowjackets’ section final vs. Ripon Christian and their final two games against East Nicolaus and the rematch against Strathmore. Those three opponents had one loss among them before facing Hilmar. They were dismissed by the ‘Jackets by a total of 154-28, all three clocked by game’s end.

Remember Rentfro’s fumble against Strathmore when he was a junior? He never fumbled again.

“There might have been one against Hughson this year,” he admitted, “but the officials blew it dead.”

Hilmar’s dominance eventually became a blessing. Its starters, 17 of them returning from 2017, played four full quarters only four times out of 15 games.

He hopes to become a correctional facility guard someday. A warning to all inmates — don’t mess with him. His brand is too strong.

“It (the branding tradition),” Rentfro said, “definitely will be passed down in our family.”

Ron Agostini was recognized for regional and national awards as a sports writer and columnist for 40 years for The Modesto Bee. He retired in 2017.