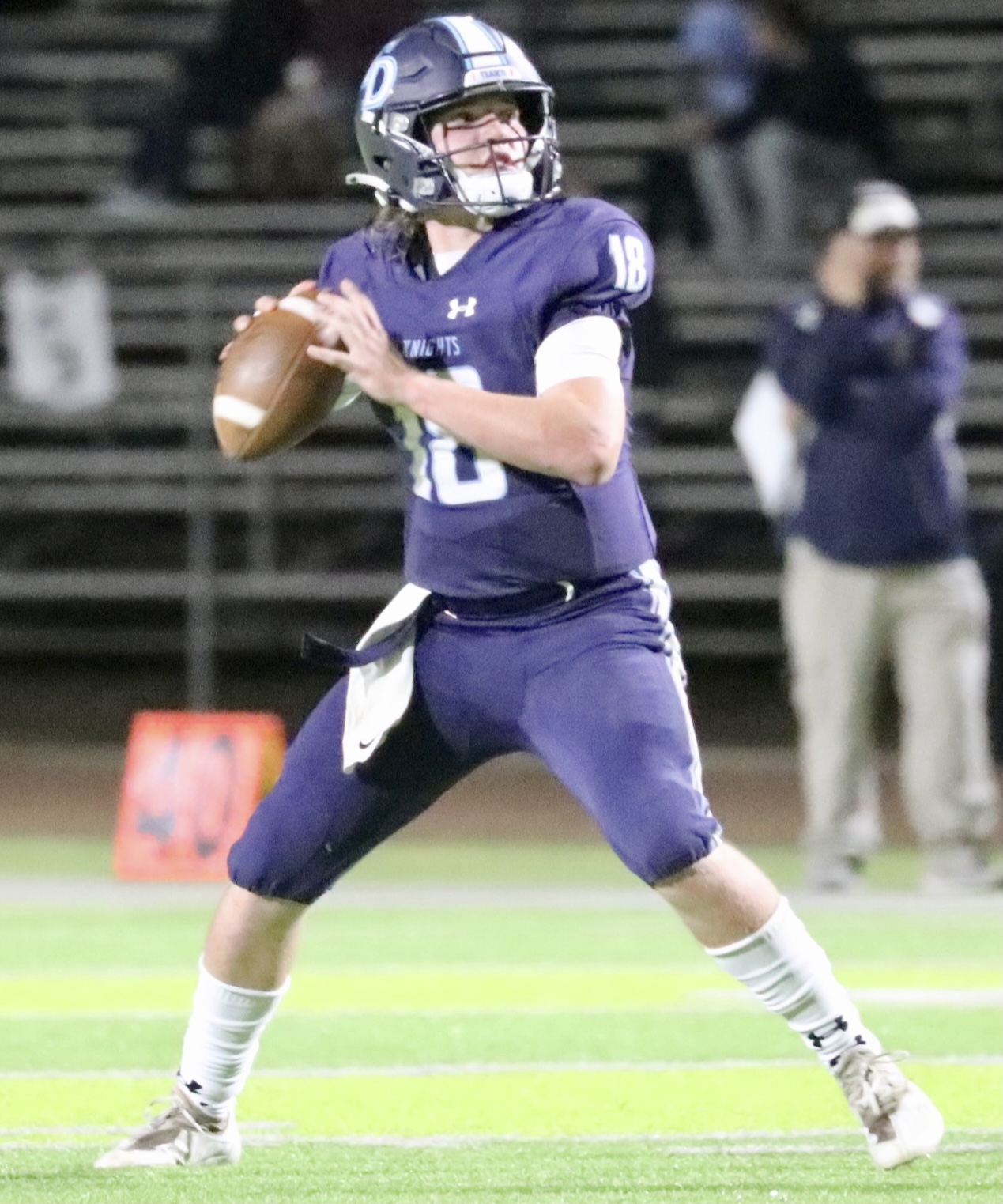 Downey junior quarterback Conner Stoddard has been electric in the last two games. He's thrown for 11 touchdowns in the last two games, guiding the Knights to a Central California Athletic League title and No. 2 ranking in this week's regional poll. (Dan Harris Photography)

1. (1) Central Catholic (8-1, 5-0): Aiden "Pony" Taylor continues to power the Raiders, who clinched at least a share of its sixth Valley Oak League title with a 38-27 victory over East Union. Taylor rushed for nearly 200 yards for the second consecutive game, but Central Catholic had to overcome a one-point deficit at the half. Taylor, a player of the year candidate, had 186 yards and two touchdowns.

2. (3) Downey (8-1, 4-0): Manteca's late-season collapse is Downey's gain. The Knights, beaten by the Buffs in their opener, clinched at least a share of the Central California Athletic League championship with a resounding 49-20 win over Gregori, and leap-frogged the Buffaloes in the rankings. Conner Stoddard was special in the win, throwing for 238 yards and five touchdowns. The 6-foot-1 junior is in complete command of the "Air Raid" offense, completing 71 percent of his passes with 11 touchdowns in the last two games.

3. (2) Manteca (7-2, 3-2): For the second time this season, Kimball quarterback Nicholas Coronado shredded a top-5 program. This time, the senior gunslinger — statistically, one of the state's best — knocked the Buffaloes completely out of the VOL title race. Coronado passed for 500 yards and seven touchdowns in the shootout. The season-long No. 1, Manteca, who lost Blake Nichelson and Lyon Colon to injury in the game, limps into a Week 10 showdown with Oakdale.

4. (4) Turlock (4-5, 3-1): Junior running back JT Foreman II topped the 1,000-yard mark in a 21-7 victory over Enochs. The win was Turlock's second straight and keeps James Peterson's team in the hunt for a CCAL co-title, though the odds are long. Foreman rushed for 129 yards and touchdown on 25 carries. His fifth 100-yard game of the season gives him 1,002 rushing yards.

5. (5) Oakdale (6-2, 3-2): Since giving up 94 points in back-to-back losses to Kimball and Central Catholic, the Mustangs have outscored their last two opponents — Sierra and Weston Ranch, the VOL's worst teams — 117-0. With the postseason just around the corner, coach Trent Merzon appears to have his team on schedule for another postseason run.

6. (nr) Patterson (8-2, 6-0): After losing to small-school power Hilmar and No. 3 Manteca to open its season, Patterson hasn't looked back. The Tigers closed the regular season last week with their eighth straight win, wrapping up an outright Central California Conference title. Senior quarterback Jacob Guevarra has been special, boasting a touchdown-to-interception ratio of 24-2. He's also got nearly 500 rushing yards and 10 scores.

7. (nr) Merced (6-3, 4-1): Since losing a shootout to Patterson, the Bears have ripped off three consecutive wins. Merced has rolled El Capitan, Buhach Colony and Central Valley by a combined score of 171-35, and will close the regular season with a Mayor's Cup clash with Golden Valley.

8. (nr) East Union (5-4, 2-3): Led by first-year coach Mike Kuhnlenz and senior quarterback Luke Weaver (21 of 37, 293 yards, three TDs in a loss to Central Catholic), the Lancers have become the toughest team to beat in the city of Manteca. East Union took No. 3 Manteca into double overtime and then led No. 1 Central Catholic at the intermission. Performances like those have be confidence-builders for a program poised to make its first postseason appearance in four years.

9. (nr) Gregori (5-4, 3-1): The Jaguars had their three-game winning streak snapped in a 49-20 loss to No. 2 Downey. Cruz Marines accounted for all three of Gregori's touchdowns, tossing two and rushing for another. The dual-threat QB had 256 of the team's 332 total yards.

10. (nr) Davis (9-0, 6-0): Then there was one. Davis is the lone unbeaten team in the region and will be favored to complete the first perfect season by a Modesto-area program since Gregori High in 2017. The Spartans, who close the regular season Thursday against Ceres, clinched at least a share of the Western Athletic Conference title with a 48-12 victory over Johansen. The title is Davis' first in 20 years.