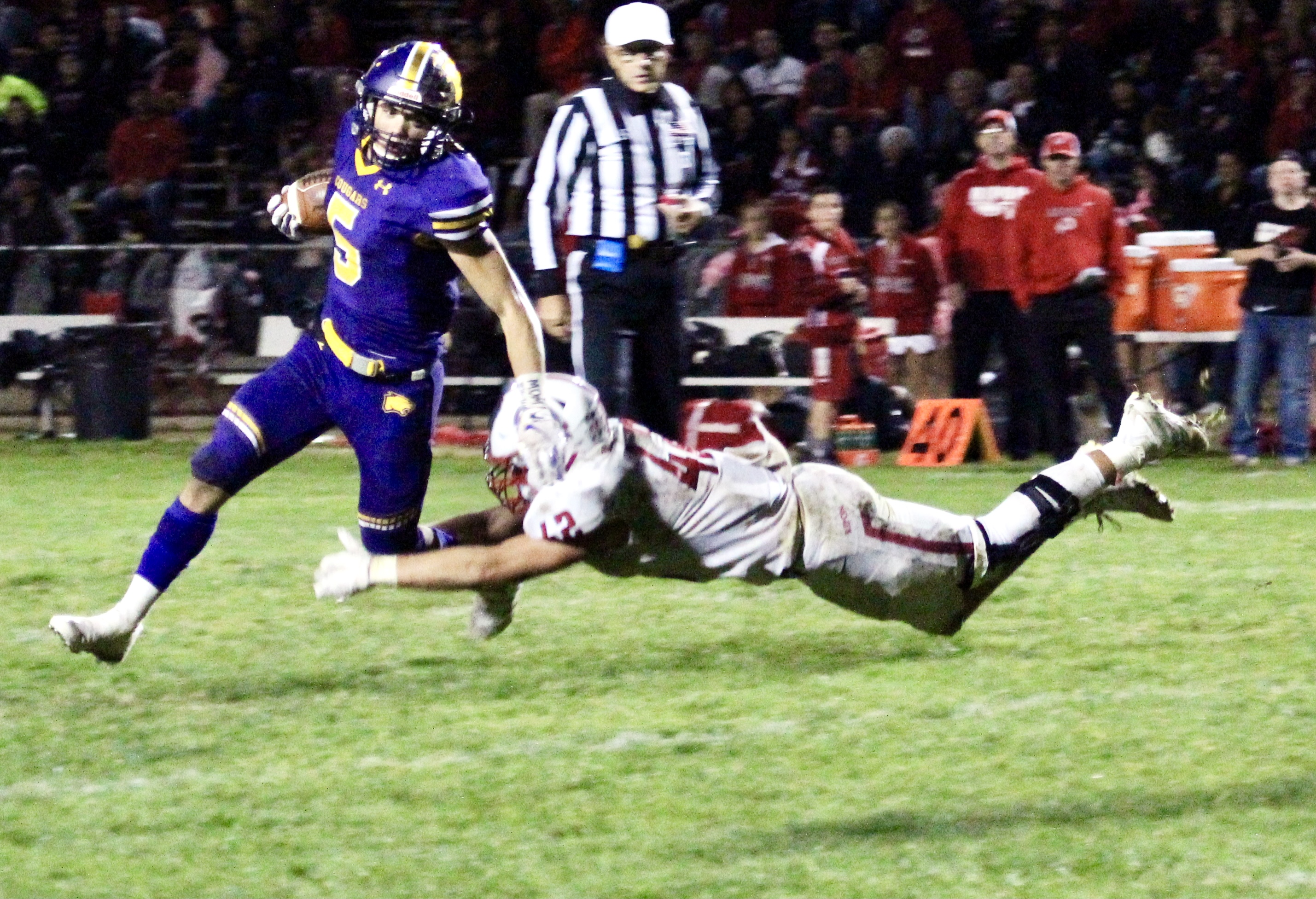 Escalon running back Logan Anderson evades a tackle by Ripon's Ethan Day during a 21-7 victory on Friday, Oct. 22, 2021, at Engel Field. (Samantha Schmidt)

TVL at the top, but expanded rankings draw Southern League into spotlight

1. (1) Escalon (8-1, 5-0): The youthful Cougars received a hero's performance from junior Matthew Baptista, who set the terms in a 21-7 rivalry win over No. 2 Ripon with a 90-yard touchdown and then clinched it with a late interception. Escalon — the 26th-ranked team in the Sac-Joaquin Section, regardless of division and school size — can clinch the outright Trans-Valley League title on Friday with a win over Livingston.

‍2. (2) Ripon (6-3, 4-1): Despite the loss, Ripon holds onto second position. The Indians' hopes of an outright TVL were dashed  by three turnovers and one big offensive play on Friday evening in the TVL's main event, but in the toughest small-school league in Northern California, championships are typically settled in the final moments of the final game. That's why the Indians, who tangle with Hughson, are rooting for Livingston to spring an upset of the Cougars.‍

3. (4) Livingston (6-3, 3-2): The Wolves routed Riverbank 55-0, but climb one spot in the small-school power rankings because Waterford was stunned by Mariposa. Livingston quarterback Rocklin Baptista attempted just four passes, but two went to the house. He also had a rushing touchdown, setting the stage for Friday's clash with the top-ranked Cougars.

4. (5) Hilmar (7-2, 3-2): Just about everyone touched the ball in the Yellowjackets' 65-0 victory over Modesto Christian. Nine different players carried for Hilmar, which won its second straight game. Seven of those nine rushers found the end zone. The Yellowjackets could spread the wealth again on Friday when they welcome winless Riverbank.‍

5. (5) Sonora (5-3, 3-0): The surging Wildcats can clinch an outright Mother Lode League title on Friday with a rivalry win over Summerville. Sonora has won four straight since losing three of its first four games, all of those losses coming to ranked opponents (Oakdale, Escalon and Hilmar). In Friday's win over Argonaut, Sonora showed its strength in the second half, rushing for 401 yards and scoring 22 points while holding the ball for 18 minutes.

‍6. (3) Waterford (8-1, 5-1): A bid for an outright Southern League title was put on hold as Mariposa stunned the Wildcats with the go-ahead two-point conversion with less than 30 seconds left in the game. The loss knocked Waterford from the ranks of the unbeaten and keeps the Southern League up in the air for one more week (although Waterford takes on winless Denair). Lurking behind the 'Cats: Mariposa and Ripon Christian, both with two losses. "This team has battled adversity all year," athletic director Josh Whitfield said. "They are tough young men. I have no doubt they will rebound and bring a banner home next week."‍

‍8. (nr) Hughson (6-3, 2-3): Idle a week ago, the Huskies will have had two weeks to prepare for Friday's visit to Stouffer Field. Senior Will Nutcher is a point of focus for the Indians' swarming defense. Nutcher paces Hughson's offense with 765 yards rushing and 13 total touchdowns.‍

9. (nr) Ripon Christian (6-3, 4-2): The Knights' two-game winning streak has been fueled by a subtle change on defense. Ripon Christian, which is now blending odd- and even-front looks, has given up just 14 points the last two weeks. Banned from the postseason for two years, the Knights are seeking a temporary restraining order, which would lift the punishment and allow RC to make a run at Sac-Joaquin Section Division VII crown.

If Knights can work around postseason ban, watch out Division VII bracket‍

10. (nr) Orestimba (5-4, 3-3): One of Northern California's oldest running rivalries will tear the Westside in two on Friday when the Warriors of Newman host Gustine. It's the 75th meeting between the two and remarkably, the series is deadlocked at 36-36-2. The teams are also tied in the Southern League standings at 3-3, though Gustine has yet to hit the four-win threshold needed to be eligible for the postseason. The Warriors possess one of the region's most explosive wide receivers in Jayden Vargas, who is averaging 23.1 yards per reception and 103.8 yards per game.