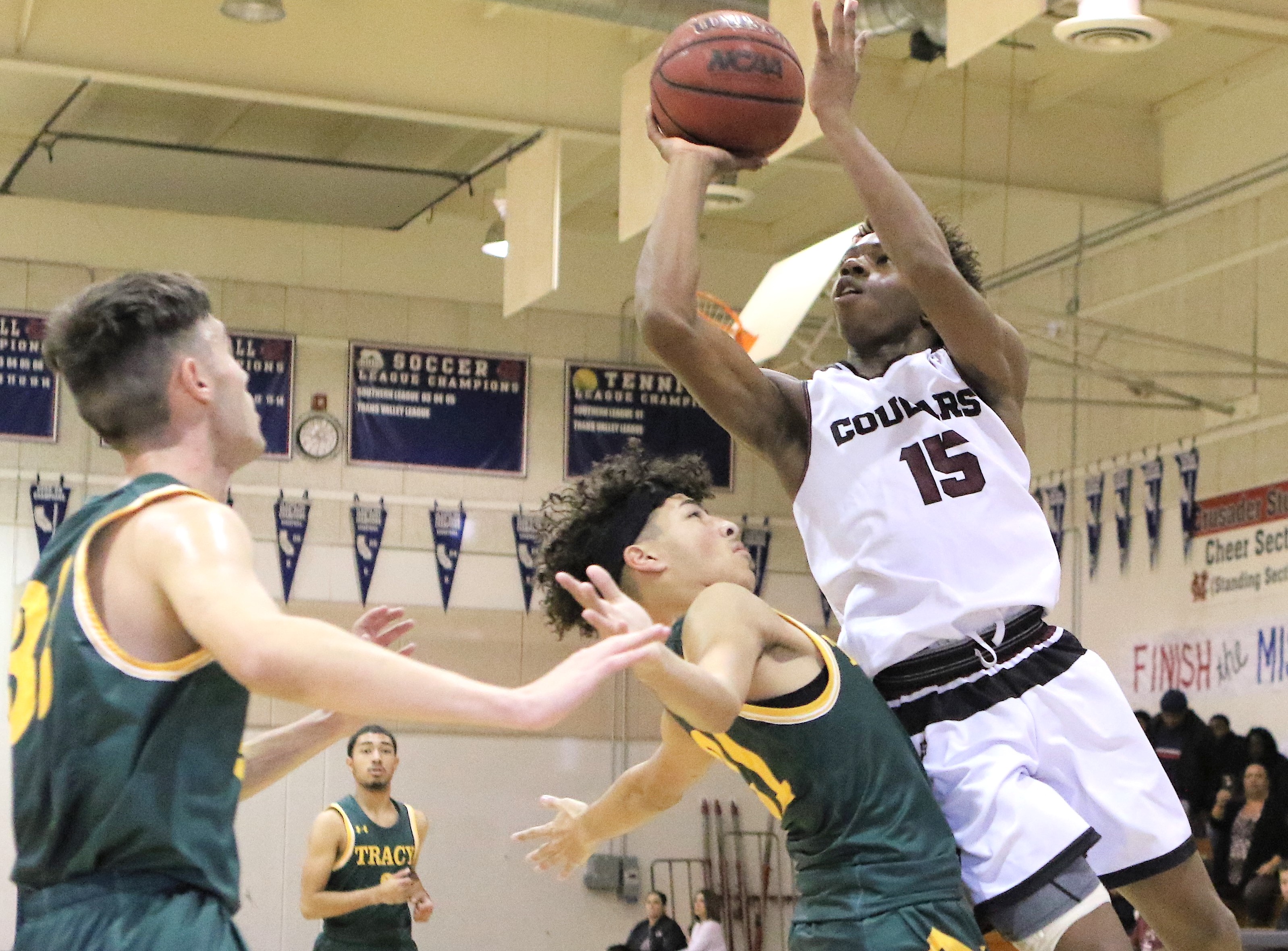 Weston Ranch guard Donjae' Lindsey scores two of his 18 points in a victory over Tracy on Wednesday, Dec. 26, 2018, in the first round of the Holiday Hoop Classic. (Sean Kahler)

Holiday Hoop Classic, Day 1: 'We didn't come out with a championship mindset.'

The highly-touted Modesto Christian boys basketball team hasn't had many nights like this — in opponent or effort.

Brice Fantazia wasn’t thrilled with his team’s energy or execution in a victory over Ripon in the first round of the Holiday Hoop Classic and praised his opponent for making things tough on the region's top program.

“I want to see us execute better. I knew we were going to come out too excited — missing layups, missing free throws, and we didn’t execute defensively,” Fantazia said. “It’s the second home game and first night of Holiday Hoop. It’s almost like this every year. ... We didn’t come out with a championship mindset and that’s on us as coaches.”

While he wasn’t happy with the win, the game offered Fantazia a chance to shake up his starting lineup and offer minutes to others. He played all 12 in uniform and 10 found the box score, led by junior Michael Pearson and freshman phenom Devin Day, who had 13 and 12 points, respectively. Tsotne Tsardsidse chipped in with 10, while Dathan Satchell, coming off the bench, finished with nine.

Modesto Christian (7-3), which has taken on a national schedule and is coming off a loss to Northern California No. 1 Salesian on Saturday, will play Manteca in Thursday's second round.

Nico Ilardi led a balanced attack for Ripon (4-8), which has lost seven of its last eight. Ilardi had nine points, followed by Vincent Olmo’s eight and Baz Cheema’s seven. Read why a loss at the Holiday Hoop Classic can be a win for the Indians, the two-time defending Trans-Valley League champions. Click here.

Sophomore Chase Bennett caught fire in the third quarter, knocking down six 3-pointers as the Cougars surged past Lincoln (4-8) in the opening game. Bennett, the son of Saint Mary's men's basketball coach Randy Bennett, finished with 25 points on seven 3-pointers. "My teammates hit me when I was open. We practice really hard together everyday, so they know I'm a good shooter," Chase said. "... It's fun for everyone."

Campolindo (7-3) needed the production from the younger Bennett. The Cougars played without two of their top guns, junior guard Carter Mahaney and senior guard David Ahazie. Both were in street clothes, nursing obvious injuries. Mahaney's right foot was wrapped in a walking boot, protecting a broken toe, while Ahazie's hand was in a cast.

With a talented backcourt tandem trading shots, Clovis West weathered an early fight from Patterson (2-9) and turned its opening game into a running-clock victory.

Sophomore Cole Anderson, a returning all-tournament selection, knocked down three 3-pointers in the third quarter, while senior Alex Villi did most of his damage in the lane. The 6-foot-4 senior turned a steal into a one-handed flush, and moments later, soared through the lane for a tip-in as the Golden Eagles' lead ballooned to 40.

"I look for him, and we look for our teammates, just to try and find the open shot whenever we can," said Anderson, whose team has won 15 of its 16 games and ranks among the best in the Central Section.

Anderson, who holds offers from San Diego State, Fresno State and San Francisco, finished with a team-high 21 points on five 3-pointers, while Villi, a springy off guard, chipped in 20. Neither played in the fourth quarter.

Villi said the Golden Eagles have a singular focus in Salida. After losing to Modesto Christian in the final of its Nike Invitational earlier this month, Clovis West wants payback. This isn't a holiday, he said, but a business trip.

"We really want another shot at Modesto Christian after what they did to us at our place," Villi said. "That's our main goal here."

The ball touched the floor just three times during a possession early in the first half as Weston Ranch pushed the tempo in a blowout win over Tracy, a Division I program: Mi’Son Coilton with the rebound to Gavin Wilburn in transition to Donjae’ Lindsey for the backdoor finish.

"We're here to ball for 32 minutes and may the best team win," said coach Chris Teevan, who maximized his team's athleticism and energy. "In an era of mix tapes and perimeter and this and that, we have a lot of dudes that play big and that makes up for the height, and it starts with No. 32."

No. 32 is Gavin Wilburn, an unsigned dynamo, the lynchpin in the Cougars' attack.

The 6-foot-3 Oakland Soldiers prospect did it all for the Cougars in the first half. He sank a 3-pointer from the top of arc, dished to Lindsey for an uncontested layup, and then followed a miss with a tip dunk as the Cougars led by as many as 15 points.  His free throws late in the first half helped Weston Ranch to a 39-26 lead at the break.

Wilburn finished with 21, matching Tracy's Isaiah Hawthorne, a University of Pacific commit. Lindsey added 18. Coilton had six points, 11 rebounds and three steals. Hawthorne had moments of brilliance in the blowout loss, nailing a running bank shot over Wilburn to beat the halftime buzzer and then turning a block into a 3-pointer in the third quarter.

Lindsey said the Cougars fed off the matchup against Hawthorne and the Bulldogs. It was a chance, he said, to steal the spotlight.

"We want to make state. We want to win sections. We want to win eveything," said Lindsey, a sophomore guard with an endless motor. "When we beat teams like this, good teams with D-I players, it gives us confidence."

Three players scored in double figures for Vanden, which pulled away from Bakersfield Christian in the fourth quarter. Vanden outscored the Eagles 19-13 over the final 8 minutes.

Jonathan Cobbs and Teiano Hardee plunged the dagger into Bakersfield Christian, scoring eight points apiece in the fourth. Cobbs led all scorers with 23 points, while Hardee had 21.

Up next: Centennial vs. Manteca.

Jorge Cedano flicked a pass into the corner for Domonick Victor, whose shot from beyond the 3-point line was pure.

Since being cleared by the Sac-Joaquin Section, Victor, an athletic 6-foot-3 guard from Massachusetts, has been a boost for the Buffaloes. Victor had a game-high 30 points, including seven in the first quarter, as Manteca advanced to the second round of the winner's bracket with a tense victory over Centennial of Bakersfield.

"It was definitely important that I come in and fit in," Victor said, "and give us as much energy as possible. I fit in really quickly. I've known these guys since the summer and we meshed right away. We're friends on and off the court."

For the third time in a week, Cedano flirted with a triple-double. He had 19 points, seven rebounds and seven assists, but struggled mightily from the floor. He was just 4 of 12 from the floor, but helped close the game from the free-throw line.

Victor was the story through three quarters. He shot 12 of 15, including 5 of 6 from beyond the 3-point line. He also had six rebounds as the Buffaloes built a 21-point lead. "I'm normally a slasher," Victor said, "but tonight I expanded my range."

As Manteca has shown this season, no lead is safe. Centennial, which arrived just before warm-ups, trimmed the lead to seven with less than two minutes left in the game on a barrage of 3s.

Early on, Turlock neutralized St. Patrick-St. Vincent’s height and athleticism with shooting and their own Division I prospect in the post.

The Bulldogs built a 34-24 lead at the half on six 3-pointers — two apiece by Cole Carrigg, Cam Sherwood and Cameron Walker.

St. Patrick-St. Vincent features one of the top recruits in the tournament in 6-10 center Dishon Jackson, but his effectiveness, at least early on, was nullified by Turlock’s 6-8 Everett Johnson, who has verbally committed to Cal football. Johnson played a season-high in minutes, helping to limit Jackson to six points.

Yet, behind the strong play of Akil Edwards (22 points), St. Patrick-St. Vincent battled back to take the lead early in the fourth quarter. Edwards, a football star in the Bay Area, tied the game with four consecutive points to start the frame, and Esai Contreras pushed the Bruins ahead with two free throws.

Turlock had an answer, though.

Sherwood, a veteran of the Holiday Hoop Classic, answered with a barrage of 3s. He buried three 3s in the fourth and finished with a game-high 23. His last triple with 2:07 remaining gave the Bulldogs the lead for good.

It wasn’t without drama, though. With time fading away, Edwards’ potential game-tying 3-pointer from the top of the arc lipped out.

"We've been in some close ones, where we were right there with the lead," Turlock coach Doug Cornfoot said, referring to losses to Sierra, Manteca, East Union, Merced and Golden Valley. "At shootaround this morning we talked about we're a 6-6 team, but in our minds we should be 8-4 or 9-3."

"It was all about playing as a team and finishing games. When we play as a team, we've usually been ahead of teams."

Carrigg and Walker had 11 points apiece for the Bulldogs, who play Weston Ranch in the second round.

The Patriots trailed by as many as 13 points early, but roared into the lead in the second half on the strength of Dom Dancer. The senior point guard scored five consecutive points to finish the third quarter, giving Beyer a 49-46 lead.

Foothill swung back, though, holding the Patriots scoreless for more than 3 minutes in the fourth  to regain control. During that time, the Trojans pieced together an 11-2 run, highlighted by back-to-back 3s by Jaden Phillips and Byran Diaz.

Another flurry by Dancer trimmed Foothill's lead to 61-58 with 15 seconds left. Dancer buried a 3 from the wing and then finished with his left hand in transition to give the Patriots hope.

A turnover on the ensuing possession gave Beyer a chance to force overtime, but the Patriots passed on a 3-point attempt and missed a driving shot with less 5 seconds left.