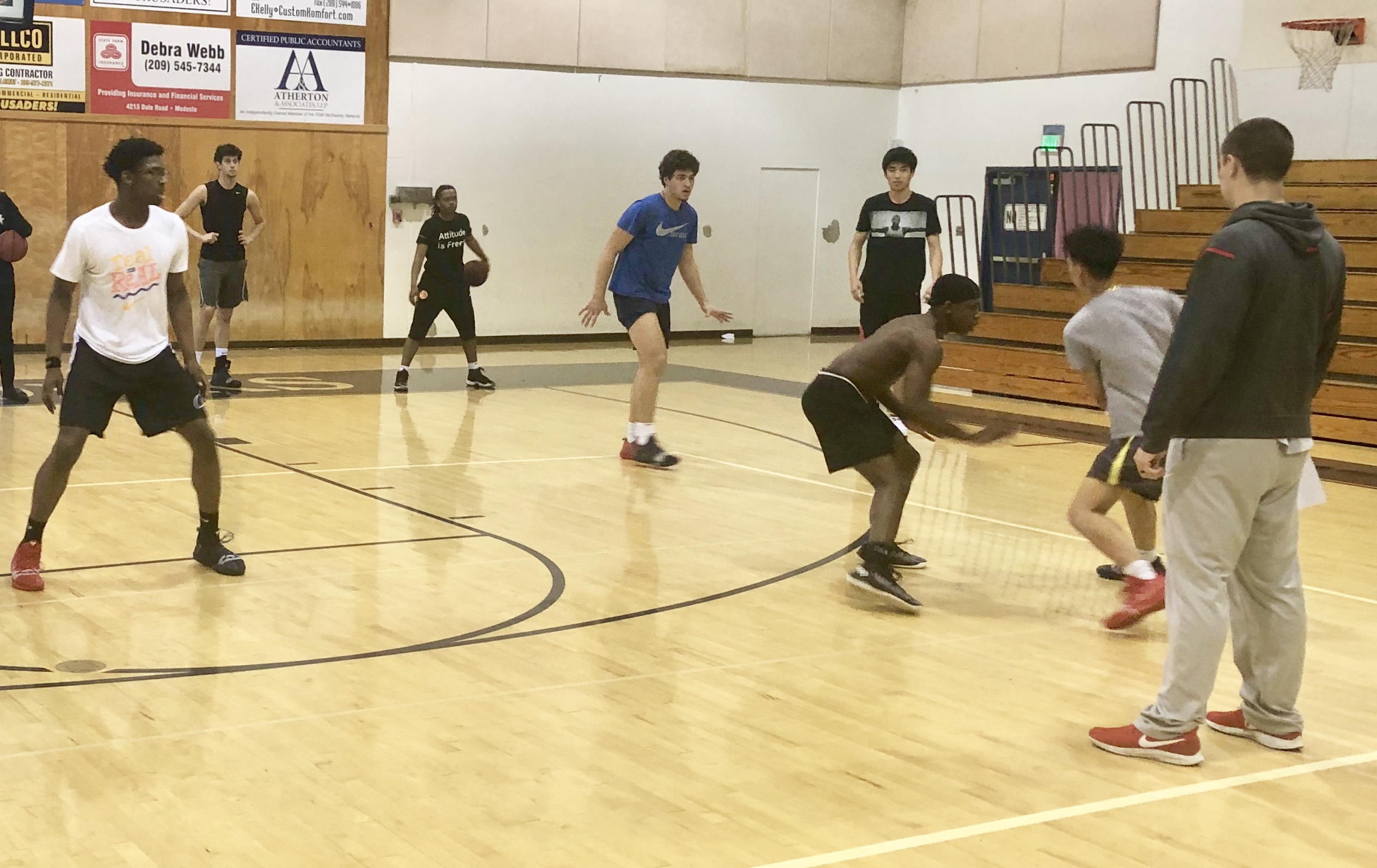 Modesto Christian coach Brice Fantazia (right) watches over practice on Monday, March 4, as his team prepares for its showdown with Sheldon in the CIF State Northern California Open Division final.

Modesto Christian’s Aaron Murphy put his fists together, clashing the knuckles as he talked about Sheldon’s Marcus Bagley, a national recruit and the younger brother of Sacramento Kings rookie Marvin Bagley III.

Murphy and Bagley have met in the past, but summer league battles have little consequence or bearing on the postseason. In a moment of self reflection, Murphy understands he’s grown as a player. And so has Bagley, who missed the Sac-Joaquin Section playoffs with a back injury but returned Saturday with 10 points in a win over De La Salle in a CIF State Northern California Open Division semifinal.

“Different player — very different player. He’s got more energy, playing rebounds and he’s getting on the glass, and defending really well. He’s doing everything I do,” Murphy said with a mile-wide smile, pressing his knuckles together. “It’s going to be head to head.”

The Crusaders and Huskies meet for the second time in 11 days — and sixth time in four years — this time for the right to represent Northern California in the CIF State Open Division final. Sheldon hosts the rematch on Tuesday at Cosumnes River College, its right after rallying to beat the Crusaders in the Division I section final at the Golden 1 Center on Feb. 23.

The sequel tips at 7 o’clock.

Playing without Bagley, the Huskies stormed back from a 14-point deficit in the second half to stun Modesto Christian, the reigning Division I champion. The Crusaders were gunning for their third D-I banner in four years.

Modesto Christian has momentum of its own after spoiling Salesian’s bid at a perfect season in Saturday’s semifinal round. Murphy scored 19 points and freshman Devin Day knocked down two crucial fourth quarter 3-pointers in a 56-55 victory over Salesian, the top-seeded team in the tournament and the state No. 1, according to Cal-Hi Sports.

Day’s 3-pointers stabilized Modesto Christian after leading scorer Michael Pearson Jr. fouled out with about seven minutes left. He connected from range on back-to-back possessions, giving the Crusaders a 41-37 lead with under five minutes left.

“When he fouled out, I needed to help (the team) with scoring,” Day said.

Murphy said the Crusaders were due for a win over a big-time program. Modesto Christian stacked its schedule this season with national tournaments, high-profile showcases and intriguing matchups. Of its seven losses, three are to programs ranked No. 1 in their state (Salesian, Oak Hill Academy of Virginia and Gonzaga Prep of Washington) and four to teams ranked in the top-50 in California (Campolindo, St. John Bosco, Santa Margarita and Sheldon), according to various media outlets.

“Every dog has his day,” Murphy said, “and that was our day. We really battled and pulled that out. I’ve never felt so close to my team ever until that win.”

If Sheldon’s confidence is boosted by the return of Bagley, Modesto Christian looks forward to a full-service Murphy. He missed time in the first meeting after rolling his ankle.

When healthy, Murphy has been one of the most explosive and efficient players in the Central Valley. In five postseason games, the 6-foot-8 UC Davis commit is averaging 17.2 points and 9.2 rebounds, and he’s stood tall in victories over Folsom, Archbishop Mitty and now Salesian.

“I’ve been juiced up and excited about this through the weekend and all week,” Murphy said. “After we won, it was like, ‘Alright, back to Sheldon.’ I’m not going to get hurt this time. We’re not going make those mistakes this time. When we get up, we’re going to put our foot on their neck and keep it there because …