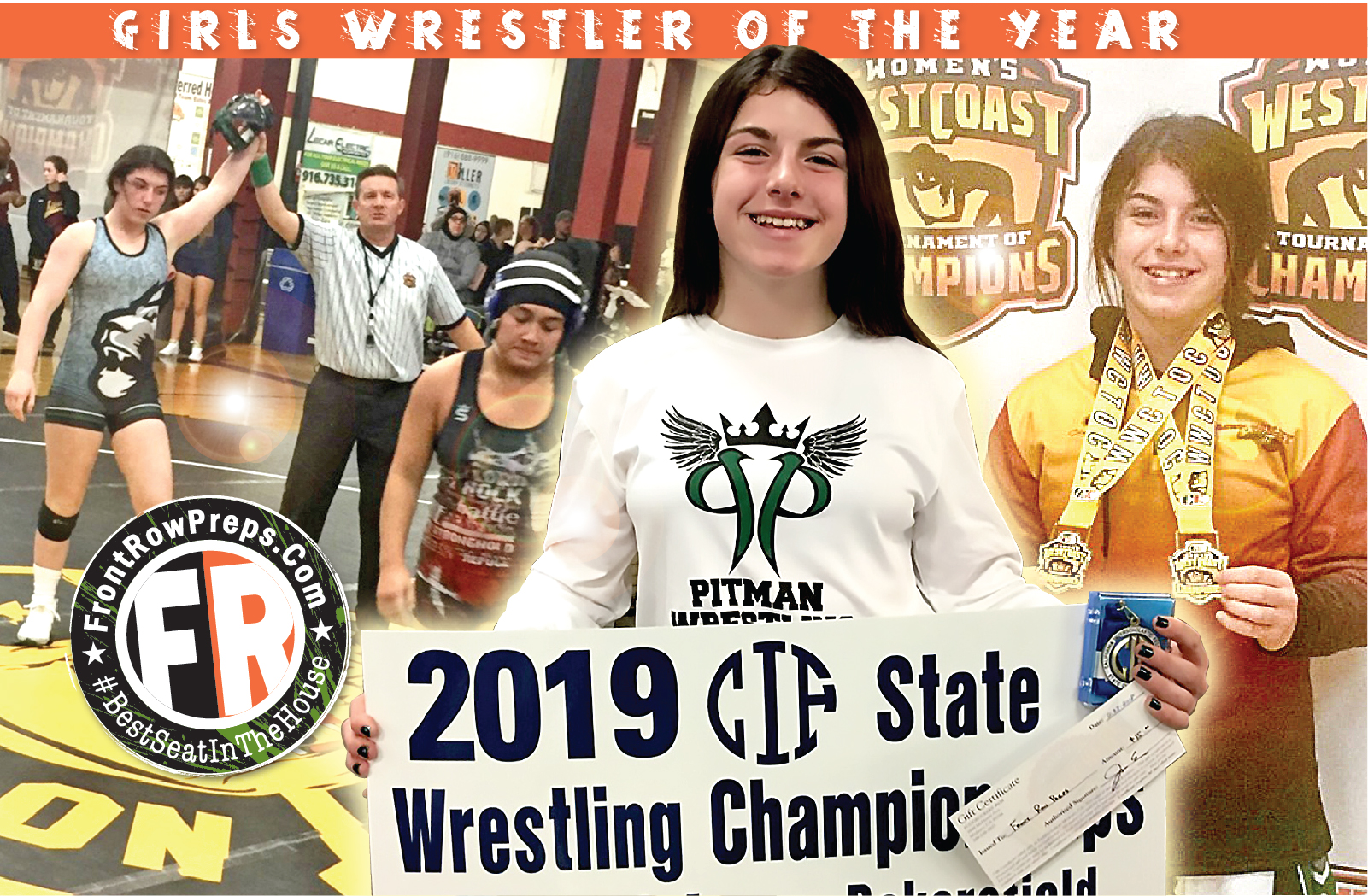 The perfect Lilly: Unbeaten Pitman freshman is girls Wrestler of the Year

For the All-Region boys and girls wrestling teams, click here. For the American Chevrolet Boys Wrestler of the Year, click here.

So it followed that any attempt at head games proved out of the question.

Case in point: The state female wrestling finalists gathered at the tunnel for the parade onto the floor at Bakersfield’s Rabobank Arena. There, Freitas overheard her finals opponent – top-seeded Gianna Anaya of San Fernando – chatting with a teammate.

“I was behind her. I heard her say ‘She’s hasn’t done anything here. I got this,’” Freitas said.

Anaya, 40-1 going into the 143-pound title match, shouldn’t be blamed for confidence. But talk doesn’t get it done against the outrageously talented youngster from Turlock.

Freitas, 14, paced back and forth alone behind the other finalists after she was introduced. Her match was No. 2 on the program, so she made sure her game-face was in place.  But also true was this: She was locked in on making a statement.

And that she did. Within 10 seconds, she scored a takedown. In 54 seconds, she pinned Anaya – the second-fastest stick of finals night – and celebrated a perfect 33-0 season.

With no doubters left, Freitas was an easy choice as FrontRowPreps.com’s Female Wrestler of the Year.

She compiled the most dominant season by any freshman, male or female, in recent area history. And that’s saying something when one factors in three-time state champion Louis Bland of Central Catholic and Modesto High brothers Emilio and Israel Saavedra.

Consider her 5-0 run at Bakersfield: Pin in 34 seconds, pin in 43 seconds, pin in 3:13 and a 13-0 major leading to her quick work against Anaya. Earlier that day, she overwhelmed returning state medalist Francesca LoPresti of Albany.

But that was in rhythm with the rest of the season. She beat 29 of her 33 opponents by fall, two by tech and two by major. Pitman coach Adam Vasconcellos already has a forceful comeback for those who criticize the ease of her victories.

“It’s crazy what she’s done,” he said. “She is in her time. It’s not her fault that she is so much better.”

Freitas, Pitman’s first state wrestling champion, and fellow freshman state champions Amit Elor of College Park, Cristelle Rodriguez of Buchanan, Leah Gaitan of Yucaipa and Jennifer Soto of Orland figure to hold a monopoly on the podium’s top rung for a while. There’s no reason to believe Freitas will falter.

She’s been among the nation’s best in her age group for years. At age 12, she topped a bracket of boys at theTulsa Nationals. Nearly a year ago at the Reno Worlds, she bypassed a cakewalk in the 12-under class and challenged herself at 15-under.

No matter. She finished on top.

“She trains with boys. She’s a fighter. She is an equal in our room,” Vasconcellos praised. “She has grown up competing against the toughest wrestlers in the nation.”

Freitas has no major weaknesses, impressive for a still developing wrestler. She's good on her feet, hand-fights with skill and attack the legs. Simply, she's relentless.

Incredibly against this backdrop, Freitas never was seeded No. 1 before any event this season. She won prestigious titles at the Women’s TOC in Rocklin, the Queen of the Hill in Corona and the Napa Valley Classic but was never given the top seed. At Bakersfield, she was No. 3.

One tournament listed her absence of credentials as a freshman compared to older opponents. One of wrestling’s most pleasing qualities, however, is its accountability. Mid-season rankings are fine, but everything eventually gets decided on the mat.

For all she’s done, Freitas believes her state title is her best to date. Her victory coincided with the merging of the boys and the girls for the first time at the state meet. The girls state meet has been sanctioned for only nine years by the CIF, so she understood the history of the moment.

She also understands what her talent might mean to her. Girls wrestling continues to grow, and more female scholarships might be available come graduation time in 2022.

“I’m a freshman and the first from my school to win (a state title),” Freitas said. “High school is the major stage. It’s a big step up and now that’s what matters the most. And they (college coaches) look at the state meet, not the 10-under at Tulsa.”